This is a slow-motion, split-second reconstruction of what happens when a car, traveling 55mph, crashes into a solid, immovable tree: 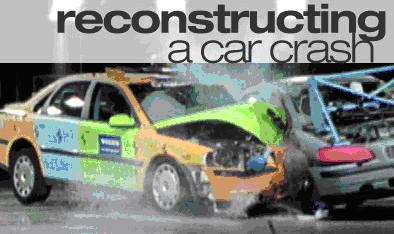 One-Tenth of a Second

The front bumper and chrome 'frosting' of the grill work collapse. Slivers of steel penetrate the tree to a depth of one and one-half inches or more.

Two-Tenths of a Second

The hood crumbles as it rises, smashing into the windshield. Spinning rear wheels leave the ground. The front fenders come into contact with the tree, forcing the rear parts out over the front door. The heavy structural members of the car begin to act as a brake on the terrific forward momentum of the two-and-a-half ton car. But the drivers body continues to move forward at the vehicle's original speed (20 times normal force of gravity, his body weight is 3,200 pounds). His legs, ramrod straight, snap at the knee joints.

Three-Tenths of a Second

The driver's body is now off the seat, torso upright, broken knees pressing against the dashboard. The plastic and steel frame of the steering wheel begins to bend under the drivers grip. His head is now near the sun visor, his chest above the steering column.

Four-Tenths of a Second

Five-Tenths of a Second

The driver's fear-frozen hands bend the steering column into an almost vertical position. The force of gravity impales him on the steering shaft. Jagged steel punctures lung and intercostals arteries. Blood pours into his lungs.

Six-Tenths of a Second

The driver's feet are literally ripped from his tightly laced shoes. The brake pedal shears off the floor boards. The chasis bends in the middle, shearing body bolts. The driver’s head smashes into the windshield. The rear of the car begins it's downward fall, spinning wheels digging into the ground.

Seven-Tenths of a Second

The entire body of the car is twisted out of shape. Hinges tear, doors springs open. In one last convulsion, the seat rams forward, pinning the driver against the steel of the steering shaft. The impact kills the driver instantly. 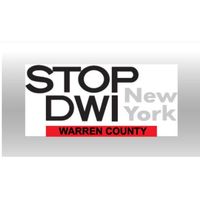