On July 12, 1954, the annual Governor's Conference was held here in Warren County at the Sagamore Hotel in Bolton Landing. Along with each governor from the 48 states, Warren County was visited by the country's Vice President, Richard M. Nixon. As these officials travelled down the streets of Glens Falls they were met by over 2,000 people who were there to catch a glimpse of the vice president.

Huge crowds lined Dix Avenue, Glen Street, and Route 9 to see the Governors and Vice President Nixon as they traveled from the airport through Glens Falls and on to Bolton Landing 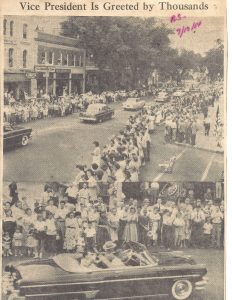 For the event, each of the cars was driven by a state trooper who was also to keep the governors safe. For the vice president, the car was driven by the Secret Service as he was paraded through the city. Once the officials made it to the Sagamore, other officers would patrol the area, including patrols on the lake.

The plans for the routes traveled and the protection of the dignitaries were made when it was thought that President Eisenhower would be attending the meeting in Bolton Landing. Unfortunately, the death of someone in the President's family, (some reports say it was Eisenhower's brother, others say his sister-in-law), prevented him from coming. He had to attend her funeral instead, so Vice President Nixon came to Warren County in his place. Despite the sudden change, people were still excited to see the vice president.

Nixon arrived at the Warren County and was greeted by local political leaders when he departed the presidential plane. He was loaded into a car and the parade was begun, the plan being to travel through the city via Dix Avenue and then travel Routes 9 and 9N to Bolton where Nixon would deliver President Eisenhower's speech prepared for the governors. 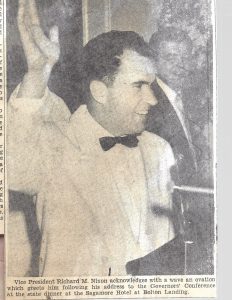 At the Sagamore Hotel the governors enjoyed the recreational activities that were offered. They swam, fished, took boat rides on Lake George, and played golf. Half of the attendees went up to Ticonderoga to visit the stone fortress we know as Fort Ticonderoga. The governors and their families were given a special tour of the fort.

The Sagamore Hotel at Bolton Landing. The top photo is a post card from the mid-1960s. The bottom postcard is dated 1954. 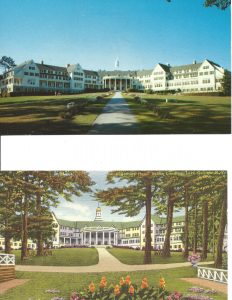 Before the governors left the Lake George area, they were given many gifts by the locals. They received ashtrays from the hotel and other items. Their wives were offered gifts such as jewelry, bags, hats, scarfs, and a variety of other items.

The Mohican Council of the Boy Scouts of America even had a tomahawk that they were going to present to President Eisenhower.

After the 1954 Governor's Conference, Bolton Landing and the Lake George area as a whole say more tourists who wished to see the lake for themselves. Thanks to the efforts made by then Governor, Thomas Dewey, Warren County saw attention from people all over the country.