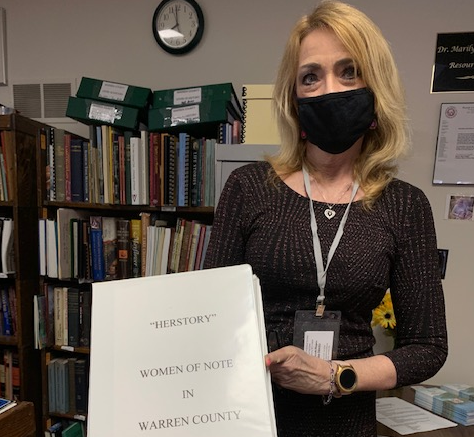 To say Drs. Annie Hull and Annetta Barber were important women in early 1900s Warren County would be an understatement.

Both women were physicians in the Glens Falls area at a time when women doctors were almost unheard of.

Drs. Hull and Barber graduated from medical school in the late 1800s, and quickly became integral parts of the Glens Falls medical community, delivery hundreds of babies and caring for the critically ill.

Barber went as far as running her own hospital at 261 Glen Street in Glens Falls, while Hull was known for house calls and providing free care to many.

The stories of these two pioneering women can be found in a section of Warren County Historical Society dedicated to prominent women in Warren County’s history.

As we observe National Women’s History Month, it’s a great place to start to learn more about the myriad women who helped shape Warren County into the community it has become.

Historical Society Director Teri Podnorszki Rogers, an author and leader in local history in her own right, proudly shows off a binder filled with clippings titled, “Herstory: Women of Note in Warren County.”

“We have contributions from women who were important in Warren County’s history throughout our exhibits,” Rogers explained.

Page after page in “Herstory” outline the roles of women at times when they had to fight for rights that are now taken for granted by some.

There are pages about Harriet Wing’s role in assisting Civil War veterans from our region, and information about Frances Kinnear, a teacher who drove an ambulance in combat in Europe in World War II.

The Warren County Board of Supervisors, for the first time in its 208-year history led by a woman in Chairwoman Rachel Seeber, passed a proclamation Friday recognizing that March is National Women’s History Month.

"It’s important to recognize that our county, state and nation come together to recognize the contributions made to our communities during the month of March as we celebrate Women’s History Month,” said Rachel Seeber, Chairwoman of the Warren County Board of Supervisors. "It is essential that we recognize all the different strengths that each and every person brings to our communities.  As a Board of Supervisors we continue to renew our commitment to awareness and advocacy highlighting our monthly proclamations supported by our legislators."

“As we reflect on Women’s History Month, it is a great time to acknowledge the power and justice of equality,” added Andrea Hogan, Chairwoman of the Warren County Board of Supervisors Economic Growth Committee. “Hopefully attention brought to the contributions that women have made will inspire the next generation of women business owners, politicians and leaders.

The exhibits at Warren County Historical Society’s headquarters at 50 Gurney Lane will re-open to the public on April 1. Go to  www.wcnyhs.org/ for more information.